Leggett & Platt® wanted to find out if its pure-gel, 78% open-air comfort layer could stand up to extreme testing. That’s why their team brought in two 9,000 lb. elephants to put SomniGel® through the paces.

In scientific testing, SomniGel proved significantly more durable than latex, visco and polyurethane foams. During 100,000 rollator cycles simulating 10 years of use, SomniGel lost only 3.5% firmness compared to polyurethane losing 49%, latex 23% and visco 16%. With that data in hand, their testing team took a big next step by bringing in a universal symbol of heaviness – elephants.

“In addition to pressure relief and cooler sleep, SomniGel is durable. We wanted to really show manufacturers and retailers that mattresses built with SomniGel won’t take a body impression. Body impressions are the #1 reason for mattress returns. If our product bounces back after being under the weight of two giant elephants, we’re confident SomniGel will deliver years of consistent, comfortable sleep without losing its shape,” said Mark Kinsley, Staff Vice President of Marketing for the Bedding Group.

Visit SomniGel.com to see video of the elephants putting SomniGel through the paces.

SomniGel is scientifically engineered for pressure relief, cooling airflow and comforting support. Hollow columns deflect pressure as weight is applied and redistribute it to the surrounding areas. The pure gel dissipates heat away from the body to maintain a cooler sleep environment. SomniGel’s design and construction keep it from losing firmness or taking a body (or elephant foot) impression. 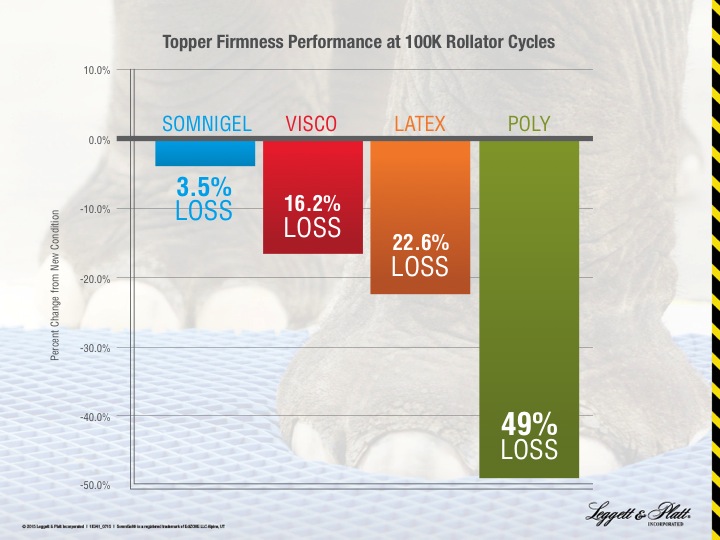 How a Robbery Launched Liza's Mattress

This is the Story Behind the Oldest Mattress Brand

Days Can Be Uncomfortable: Wrong Turn

How R.E.M. Fit's App is Different from Other Fitness Trackers

Michael Hyatt Explains How to Achieve More by Sleeping More

And Now...Animals Trying to Stay Awake

Foam School: A Deep Dive on Poly and Visco

Don't Buy a Mattress Based Upon Warranty

Being the Box Springs

Basics of Mattress Innersprings (Part 1 of 2)

Basics of Mattress Innersprings (Part 2 of 2)

What Would Happen if You Didn't Sleep

Tempur-Pedic Launches Its Coolest Product Ever

How Quantum Edge Works For You

The Scientific Power of Naps

How Quantum Edge Works for You

Behind the Scenes of Dave Perry's Visit to Leggett and Platt

Bob Sherman is Back